We all know how mothers took to blogging like Renee to Renato. It made sense, you're home all day, you don't get to talk to adults or go out much, you don't have enough of a creative outlet - communication is the prize.

Mommy Bloggers got super popular in the States but now Daddy Bloggers are stealing the limelight. metrodad and BlackHockeyJesus rock not only my world but a legion of other readers too. And they have blogger friends who are great too, so check their links.

Closer to home, I was moved and a bit discomfited by this post from Sniffle&Cry. Here is a concerned post about responses to addiction by chrisppancake. Nick writes about his responses to his son Jake, and documents his happy experience of having a son with Down's Syndrome. His blog is both outlet and resource and today's post is political. How does our casually negative use of language disparage and set back the cause of people with special needs? I'm a little shocked at people's willingness to brand him a 'pc nazi' because he wants to defend the group his son belongs to, and for him to grow up in a world where is valued and respected rather than ridiculed in everyday slang. Let's just say, if you have a son called Jonah, as a friend of mine does, you don't encourage use of the name to describe unlucky people.

Of course you don't have tobe a dad yet, to be a daddy-blogger. Xbox4Nappyrash is moving everyone with his frank descriptions of trying to conceive (see, that's what's going wrong, you're not supposed to be doing it with Frank). Holemaster is a long time commenter, first time blogger, and I love this post already. It hasn't been updated in a while, but I adore Conformist No.1's writing at the conforming monkey.
And of course, there's Darren, who will wow you with his social life, but also writes posts like this. And I'm sorry dearloverblog ended the way it did because I so wanted there to be a happy ending. Blogging makes you consider how you confront the world and lets others see the process.

Of course, it's not like men haven't had a monopoly on great writing (at least according to John Waters) for some time. I know it's nothing new. But I like the great big little intimacies of the blog, of reading men's responses to the daily grind, of the male experience. I think women often have a impulse to identify, and it frustrates us and leaves us grasping in the dark when men won't throw us a bone. Perhaps that's what I like about the men's personal blogs, bones thrown all over the place.

Some men seem to feel that feminism is obsolete, and any mention of it, or women's issues, is over the top harping, worthy of mockery and a hostile response. But I think men's issues are equally part of the package. Men have been as hampered and suppressed by traditional roles as women have in some regards.

A friend lived with his wife's parents after their daughter was born, and his one interaction with his daughter on the weekday was to get to bathe her - his mother in law (to be!) would be knocking on the door after 15 minutes, checking if she was alright, ready to snatch her from his arms.

I was recently at a kids' party where a little boy was freaked out and crying by the whole thing, and his dad was totally embarrassed and refused to comfort him, just kept putting him down, with all the usual boys don't cry type cliches. Or I was at the beach the other day and a little boy fell over in the waves and got that awful cold, wet shock you get and was miserable and crying, but his father wouldn't pick him up, or comfort him, he pretty much ignored the whole thing. I don't know if he was embarrassed or just didn't want to get his clothes wet.

I think it is especially relevant now to fathers and men generally, to be inventing new roles and responses, and blogs seem to be a good place to test them out. Hey! I wonder if Robert Smith has a blog!

Phew. I'm exhausted from all the linktastic linkage. If I've missed anyone out who feels like they should be in here, send your link in!
Posted by Jo at 2:32 PM

I'd like to think I'm healthily in touch with my feminine side. I can appreciate the more sensitive side of people and am all about the hugging. I grew up not knowing much physical affection and I feel I missed out. I kind of rebelled against that to become a very affectionate person (I think).

My blog is honest, as I'd like to think I myself am. I don't like to hide things. As my Biomammy said to her own mother recently, I've been hiding too much for too long - no more lies.

The blog offers a great opportunity to vent, to let off steam, to rant and rave, but it's also a wonderful place to share and nurture a very modern community spirit.

I think (in my case at least) I can write things I would really struggle to say aloud.

As silly as it seems, writing the blog has helped my marriage, ET has a place to go where she can clarify whatever rubbish I've managed to verbalise to her.

I would never have believed it, but it's become a GREAT release for me. It has kept me sane in some low times.

The comments make me laugh out loud, give me advice, (yourself included) and give us continuous hope.

The other side to it all is I have rediscovered how much I adore writing, it's not James Joyce, but it's me, really me.

As for the 'title', I could not be any more NOT a daddyblogger, for obvious reasons. That title makes me as uncomfortable as the baby names book in our bedside drawer.

I dunno, xbox, it seems to me you're working harder and devoting more time, energy and emotion to becoming a father than many men who already have children do.

Anyway, I included other non-parents in there too - sure look at young Darren, with his celebrity lifestyle - he's a Dinky!

Energy anyway, that's for sure!

I've 'bumped' into Darren a few times and clicked across to him occasionally but I'm going to get my act together and have a good read, and the others, this evening.

Hey Jo, You made me cry. That happens when I read stuff which resonates, powerful stuff. There are cynics who consider blogging a lonely pursuit, that we�re all Billy and Betty no friends and a bit geekish too. They couldn�t be wronger. I love that you say that there are bones all over the male blogs. I�ve come to appreciate more what femininity is by blogging, it�s amazing how this awareness seeps in. For me it�s like being the awkward teenager all over again but this time I actually get to say what I mean. I never visualize how a blogger looks, and get to relate to the person through the posts and comments. It�s brilliant really. I know that Virginia Woolf spoke once about a feminine sentence ( and I�m not at all familiar with her work), but it�s so true and can been seen in your pages and Sams and FMCs. Thanks for the link, it does so much for my confidence knowing that someone else got it. Thanks really.

Dude, I made you cry with this?!

Your name is truly well chosen :)

You want to cry, check out this excerpt, and then cry at the interview because the man's writing is so lively, and communicative, and understanding of humour and people and the world.


I want to cry because I didn't meet him - and because he makes me think I should never write again.

What's the code for embedding links again? Is there one that's short enough for me to remember?

Sweet fuck, I’m blabbering all over the place. ( and I’m at work) – I’m converted, thanks. He’s magnificent. Jesus that homage to his daughter.

I think you have insight, humour and a sharp, sharp style. He shouldn't make you think that Jo.

What a bunch a ould sissies. You won't find any of that soft shite from me! I'm off huntin' rabbits. With a hammer. In me vest. Dry this place up before I get back.

Nice one Jo, there are a couple there I will be returning to more regularly.

I agree that men are also restricted by gender roles and expectations, and I know I've felt a great freedom in getting to finish off my lifelong struggle to do whatever I feel like regardless of how I look or what people think.

Because let me tell you, being the primary caregiver for your young children seems to be about the biggest violation of gender stereotypes you can get, as a man.

And Black Hockey Jesus also makes me think there is no purpose in my writing so much as a grocery list. You should keep it up, though, definitely.

Thanks for that, LD. You're right about the primary caregiver, alright.

I think for so long Irish culture was so 'traditional', it's very slow to change its ingrained feelings on that topic.

I only know one man who stays home with his kids. My husband's dad was unemployed for a while, and my husband has golden memories of the two of them going down to the beach etc. Now he realises they had that time because he was out of work, but at the time he had no idea.

This reminds me, I heard an Irish woman, the same age as me not so long ago say her husband 'was babysitting' their kids for an evening.

I found that quite sad.

Oh stop, we have that issue in our house. It's been beaten out of him a bit, but not the mentality.

I'veorganised to go out, he gets a gig, end of story. It's up to me to book a babysitter, because I'm going out.

Not a whole lot can get me aggitated but that attitude freaks me out.

You don't babysit your own children. 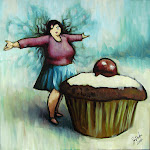 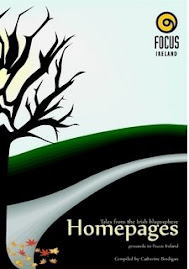 Jo
A personal blog, which mostly translates, at the moment, as a place to vent and whine and worry about kamikaze parenting.